Under a table you have the possibility to test your own absence. The realization that life is taking its course, even without you, is an intense human experience; it shows the finiteness of personality. Mark Manders has inhabited his self-portrait since 1986. This building can expand or shrink at any moment. In this building all words created by mankind are on hand. The building arises, like words, out of interaction with life and things.

Tanya Bonakdar Gallery is pleased to present an exhibition of sculptural work by Mark Manders. On view October 29 through December 19, 2015, Manders' third solo presentation with Tanya Bonakdar will be the artist's first gallery show in the United States since representing the Netherlands at the 55th Venice Biennale in 2013.

The quote above, from the artist himself dated 1996, references the retreat of a body into a space that is foreign and yet familiar, where scale and perspective shift and yet the vocabulary of forms and images remains the same. From this generative, recombinant machine emerges Mark Manders' ongoing project of creating the "self-portrait as building" : the artist's constructed timeless reality whose architectural arrangement is built and transformed, rooms populated and reimagined, in a continual and multifaceted project that extends beyond the artist's own subjectivity of the present moment.

Mark Manders' sculptures and installations present a surreal space wherein contradictions co-exist: the past and the future, the temporary and the permanent, the beautiful and the grotesque, the tender and the brutal. In the current exhibition, the viewer experiences the artist’s studio in the ground floor gallery, while the upstairs presentation moves the work to a place beyond its origin. This range of new sculptures highlights the juxtaposition of carefully rendered figurative elements, architectural fragments and altered everyday materials, thrusting the world we know into sharp contrast and heightening our perceptual understanding. This ongoing “self-portrait,” like chapters in a non-linear autobiography, gives physical form to a dreamlike psychological space where each object is rendered with subtle alteration of scale or other detail: a chair back made of painted fictional newspaper, figurative elements realized smaller or larger than human scale. Universally familiar terms such as "dog," "head," and "chair" are realized as objects combined to create abstract sentences. Produced through an intimate logic, the works appear at once just made and also enigmatically atemporal.

These works engage Manders’ longstanding interest in the artist’s studio as “a place of becoming” which has played a prominent role in many of his installations. Rendered almost entirely in painted bronze, Manders' sculptures appear to be made of other materials such as wet clay and wood. Highly craquelure surfaces further belie their primary solidity as cast objects and their relationship to any fixed moment in time. A sense of material transformed – by alchemy or time or both – pervades the scene. Lorenzo Benedetti, curator of Manders’ Dutch Pavilion presentation, has written that for Manders “the past is buried, like a ruin, and the artist is the archeologist who slowly and carefully excavates the artworks.” 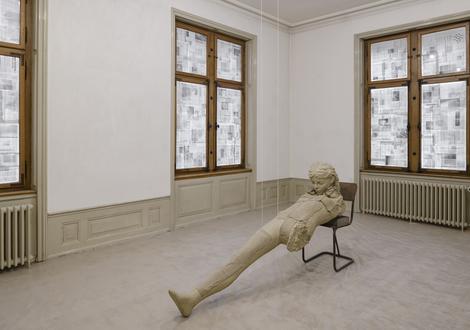