Among the most influential Brazilian artists working today, Rivane Neuenschwander’s practice explores the roles of chance, order, control, collaboration, and emotion through a wide range of perspectives and materials. Employing external elements — such as social interaction and natural processes — the artist has developed a unique language to produce complex ideas and experiences. Drawing specifically upon the legacy of Brazilian conceptualism, folk literature, and popular culture, Neuenschwander's work examines language, nature, geography, and time as they relate to history, fear, and anguish. Widely known for her use of an ephemeral lexicon, the artist probes social interactions through an acute political lens.

Central to this exhibition is the artist’s ongoing research of psychological spectrums and how fear, sexuality and violence influence our culture and politics. While the works on view stem from the current political landscape in Brazil, their impetus traces universal truths and global political trends.

For Neuenschwander, the question of fear is fundamental to mapping the myriad of ways in which authoritarian governments come to power, and the necropolitics they employ in order to maintain it. Investigating how emotions can be weaponized as tools of control and contamination, Tropics: Damned, Orgasmic and Devoted unveils the mechanisms used to perpetuate political dominance.

The expansive installation Allegory of Fear occupies the entire first floor of the gallery. Made in collaboration with architect Álvaro Razuk and musicians Arto Lindsay and Thiago Nassif, a large-scale construction of wood, mirrors, paint, fabric, overhead projectors, shadows, and sounds transform the gallery space into a labyrinth of playful perceptions, colors, and silhouettes. To create Allegory of Fear, Neuenschwander worked with children in an art-making workshop setting, discussing and collecting their impressions of fear. The artist asked the participants to express their fears on paper, subsequently producing images of cockroaches, monsters, snakes and ghosts. These images and words were then recreated by Neuenschwander on colored transparencies, creating the visual and conceptual underpinning of the work.

In Allegory of Fear, visitors are encouraged to meander through the wooden structure and interact with the work. By changing the transparencies on the overhead projectors, the public can create new silhouettes and color patterns on the walls and ceilings, allowing abstract emotions to permeate the space. Together with giant silhouettes painted on the walls, a juxtaposition of ideas and graphics create a sense of illusion, reality, and distortion. The sound components of the work are hidden throughout the room, echoing in unpredictable ways and intensifying the overarching element of angst.

Allegory of Fear speaks to different faculties of our collective and individual consciousness. It is an invitation to feel, and at the same time to reflect on feeling as an ideological construct. In actively participating—and physically altering the space around them—visitors may confront their fears, identify them, or question their roots and motivations.

This will be the third iteration of this major work. Previous versions were presented at the Staatliche Kunstsammlungen, Dresden (2019), and NC-Arte Bogotá (2018).

On the gallery’s second floor, Tropics: Damned, Orgasmic and Devoted, is a series of large-scale tapestries and corresponding paintings. Inspired by Brazilian poet Hilda Hilst’s Poemas Malditos, Gozosos e Devotos from 1984, this body of work threads together the core themes explored throughout the show.

Much like the work on the gallery’s ground floor, the graphic yet enigmatic invocations invite the viewer to reflect on disquietude—here in the form of perverse sexual encounters—as a means and a measure to establish power.  In these scenes of violence and sexual hunger, Neuenschwander seamlessly ties together disparate influences into a cohesive composition about the volatility of the human psyche.

The Order and Method, a large installation of vintage postcards and text is presented in the project room. Based on Jean-Luc Goddard’s Les Carabiniers from 1963, this new work is a dynamic and moving example of the artist’s practice.

Les Carabiniers follows the story of two peasants who are recruited to war. Misled by the promise they will be rewarded with the world’s wealth, the peasants embark on an expedition of war, committing violent atrocities on their journey. Upon returning from battle, all the soldiers bring with them is a suitcase filled with postcards depicting the treasures, prosperities, and natural wonders of the world. The postcards on view follow the film’s plot and sequence of events, creating a visual correspondence to its narrative. Overlaid in screen-print are two quotes from the film, "What do soldiers do before battle?” and "Before battle, soldiers are afraid.”

The Order and Method reflects on the real reasonings for war and how illusions are fabricated by the powers at play to further establish dominance over an unassuming public. At the same time it also points to real issues of our time such as the normalization of fake news and the trivialization of war.

Contextualizing the psychological component of fear, this work completes the emotional spectrum presented by the other works on view and raises our consciousness to the full gamut on which emotions can operate and influence our society.

Winner of the Yanghyun Prize in South Korea in 2013 and shortlisted for the Guggenheim Museum’s Hugo Boss Prize in 2004, the artist has exhibited her work internationally throughout the past twenty years. In 2010, the New Museum in New York presented Rivane Neuenschwander: A Day Like Any Other, a major survey exhibition that travelled to the Mildred Lane Kemper Art Museum in St. Louis, followed by the Scottsdale Museum of Contemporary Art in Arizona, Miami Art Museum, and the Irish Museum of Modern Art in Dublin through 2012.

The artist’s work was also featured in the 55th Carnegie International at the Carnegie Museum of Art in Pittsburgh, along with group shows at Museum of Modern Art in New York, The Solomon R. Guggenheim Museum in New York, Museum of Contemporary Art, Chicago, Kunsthalle Wein in Austria, Stedelijk Museum in The Netherlands, and Moderna Museet in Stockholm. 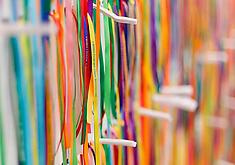