Tanya Bonakdar Gallery is pleased to announce Sleep Close and Fast, Susan Philipsz’s first solo exhibition at the gallery's Los Angeles location on view July 15 - September 19, 2020. This will be the artist’s debut one-person exhibition on the West Coast, following the US premiere of her twelve-channel installation Prelude in the Form of a Passacaglia (2020) at the Walt Disney Concert Hall in Los Angeles on February 6, 2020.

Sleep Close and Fast presents a new seven channel sound installation featuring recordings of lullabies sung in the artist’s own voice. Culled from a variety of sources including cult horror films, opera and literature, the lullabies chosen all share dark and haunting undertones. Emanating from stainless steel barrels, the sculptural acoustics suggest deep space, distance and memory. The voice recordings are accompanied by a percussion beat set to the rhythm of the artist’s heartbeat, acting as a metronome for the lullaby.

The composition of lullabies include references that range from Engelbert Humperdinck’s opera Hansel and Gretel (1983), Roman Polanski’s film Rosemary’s Baby (1968), Aleksis Kivi’s novel Seven Brothers (1870), Dario Argento’s film Profondo Rosso (1975) to Robin Hardy’s film The Wicker Man (1973). In The Wicker Man (1973), the film portrays a policeman who is called to a remote Scottish island to investigate the disappearance of a missing child. The case turns out to be a ruse, and the officer is captured and prepared for sacrifice to ensure a fruitful harvest. There is an unnerving scene at the end of the film which features a gentle lullaby sung by Brit Ekland and Diane Cilento. The soft slow descending scale and reassuring lyrics, ‘sleep close and fast’, contrasts with the horror the policeman is about to experience. Intertwining sleep with death, these seemingly soothing songs often have dual meanings and are laced with disturbing lyrics. The sounds are contained within each of the barrels and the sense of distance and isolation is palpable.

In an adjacent gallery, three organ pipes emit the deeply resonant sound of the artist’s own breath traveling through the instrument, evoking a sense of life and mortality. After producing the recordings of her breath moving through the metal forms, Philipsz projected the sound from a small speaker placed inside each pipe. Physically connected, the noises from the objects overlap and diverge, resembling a call-and-response dialogue suggesting sleep.

Illustrating the physical act of breathing, Philipsz’s photography series captures the fleeting condensation of the artist’s breath on panes of glass. Suggesting human presence and absence, these works compose an intimate act as a faceless self-portrait. The title of the series, Vernebelt is a German word relating to “mist” that was used to describe individuals who vanished without a trace under the Third Reich.

Over the past two decades, Susan Philipsz has explored the psychological and sculptural potential of sound. The artist's immersive environments of architecture and song heighten the visitor’s engagement with their surroundings while inspiring thoughtful introspection. The music Philipsz selects responds specifically to the space in which the work is installed. While each piece is unique, the storylines and references are often recognizable, exploring familiar themes of loss, longing, hope, and return. These universal narratives trigger personal reactions while also temporarily bridging the gaps between the individual and the collective, as well as interior and exterior spaces.

Born in 1965 in Glasgow, Philipsz currently lives and works in Berlin. She received a BFA in Sculpture from Duncan of Jordanstone College in Dundee, Scotland in 1993, and an MFA from the University of Ulster in Belfast in 1994. In 2000, she completed a fellowship at MoMA PS1 in New York and in 2015 was an artist-in-residence at Villa Aurora in Los Angeles. She received the Turner Prize in 2010 and was awarded an OBE in 2014 for services to British art.

Since the mid-1990s, Philipsz’s sound installations have been exhibited at many prestigious institutions and public venues around the world. She has presented solo exhibitions at Pulitzer Arts Foundation in St. Louis (2019), Castello di Rivoli in Italy (2019), Tate Modern (2018) and Tate Britain (2015) in London, Bonniers Konsthall in Stockholm (2017), Kunsthaus Bregenz in Austria (2016), Hamburger Bahnhof in Berlin (2014), the Carnegie Museum of Art in Pittsburgh (2013), K21 Standehaus Kunstsammlung Nordrhein-Westfalen in Dusseldorf (2013), Museum of Contemporary Art in Chicago (2011), Aspen Art Museum in Colorado (2010-11), Wexner Center for the Arts at Ohio State in Columbus (2009-10), Museum Ludwig in Cologne (2009), Institute of Contemporary Art in London (2008), among others. Installations by Philipsz were included in Skulptur Projekte Muenster in 2007 and the 55th Carnegie International in 2008. Her work Study for Strings was conceived for dOCUMENTA 13 in 2012 and was performed at the Pulitzer Arts Foundation in 2020, in conjunction with Philipsz’s solo exhibition there.

The artist’s major commissions include Lowlands, her Turner Prize-winning work for Glasgow International in 2010, SURROUND ME: A Song Cycle for the City of London, a public project organized by Artangel in London (2010-11), Day is Done, a permanent installation organized by the Trust for Governors Island in New York (2014), New Canaan, a project for the Grace Farms Foundation (2015), and most recently Prelude in the Form of a Passacaglia, commissioned by LACMA Senior Curator Stephanie Barron and independent curator Nana Demand for LA Phil’s programming Weimar Variations at the Walt Disney Concert Hall in Los Angeles in February 2020.

Philipsz’s work can be found in the collections of the Baltimore Museum of Art, Fondation Beyeler in Switzerland, Carnegie Museum of Art in Pittsburgh, Castello di Rivoli in Italy, Solomon R. Guggenheim Museum in New York, Hirshhorn Museum and Sculpture Garden in Washington D.C., Museo Nacional Centro de Arte Reina Sofia in Spain, Museum of Contemporary Art, Chicago, Museum Ludwig in Germany, National Gallery of Victoria in Australia, SFMOMA in San Francisco, The Tate in London, Walker Art Center in Minneapolis, and The Bass Museum of Art in Miami.

While we are excited to welcome you back, the safety of our visitors and staff is of utmost importance. In accordance with California State’s guidelines we will require all guests to wear a mask and practice social distancing when at the gallery. Visits to the gallery require an advance appointment, available in 30-minute time slots for up to 2 people at a time. 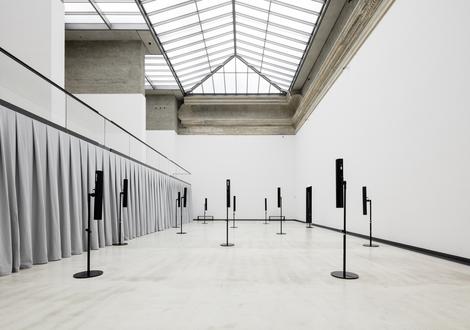