Tanya Bonakdar Gallery is delighted to present the first-ever solo exhibition in Los Angeles of renowned artist Tomás Saraceno. This will be the artist's seventh solo exhibition with the gallery. On view from January 12 through March 2, 2019, the exhibition will feature a variety of new sculptures, installations, and two-dimensional works that continue Saraceno’s mediations into the ecologies in which we are embedded and our perception and understanding of them. Directly following the artist’s critically acclaimed solo presentation ON AIR at Palais de Tokyo in Paris, the most visited exhibition in the history of the institution, the gallery exhibition will present an ecosystem that hosts a choreography of multiple voices, belonging to human and non-human universes.

This exhibition tells stories from the perspective of the web—which is not separate to the spider, but a material extension of its senses and thoughts, an assemblage that can be thought of as a spider/web. These hybrid webs, woven together by different species of spiders, become a figure of interspecies solidarity and embodied cognition. They invite us to consider the impossibility of differentiating the individual being from the web of life in which we are entangled, triggering a sentient reflection on perceiving worlds through the worlds and bodies of the others, just as the spiders in the hybrid web would be able to sense vibration traveling through the web of another spider. The silk of semi-social spiders forms an integral, cerebral, and literal web through the gallery spaces, making tangible the invisible recursive relations between earthly geometries and the greater cosmos.

Radio Galena is presented in the entryway of the gallery. A mineral sonic sculpture, the work is comprised of a stone wrapped in wire, which is not connected to the electrical grid. It uses no batteries or solar panels and yet, it can function as a radio in certain parts of the atmosphere, entering into reverberation and receiving radio waves. It acts like a traditional crystal receptor, one of the first radio receptors ever invented. This sort of talking stone proposes to focus on early and neglected forms of sound technology and to tune us in to ecological frequencies. Radio Galena can receive Ma-puche radio station, which is used by a group of indigenous inhabitants in southern Argentina who focus on their legal rights claim to land autonomy. In the recent past, crystal radios were used as clandestine receivers in times of war, when regular radios were confiscated from civilians.  The concept of this stone reflects the multiplicity of our existence on Earth and can sometimes sound like a murmured warning against its undermining temporariness. Philosopher, Marshall McLuhan said, ‘The subliminal depths of radio are charged with the resonating echoes of tribal horns and antique drums. This is inherent in the very nature of this medium, with its power to turn the psyche and society into a single echo chamber’ (McLuhan, 1964). One can imagine that geological strata are forming the book of Earth’s history. Each stone then becomes one sentence telling the history of its deep time. This radio stone questions us: How could the Earth reverberate differently if we attuned to “geological broadcasting”, in a post fossil fuel regime?

Next to Radio Galena is a cosmic dust print, which further explores the invisible specks and particles that exist among us on earth. Created from a series of images in NASA’s “Cosmic Dust Catalogue” from 1982, this work is printed with black carbon PM2.5 pollution extracted from the air of Mumbai. The black carbon ink is printed on 8-gram hand made paper, as a photo giclée print.

In the center of the main gallery space balloons float, tethered to pens that draw on paper, framed, lying flat on the ground. Drawing with the air, every gesture of the balloons leave a trace. The movements of visitors and the heat of the space all translate as the potential language of earthly phenomena creating an emergent cartography of the air.

Framed works composed with carbon-inked spider silk line the walls. The works’ titles feature the names, genus and species of the spider collaborators who came together to tune their strings, and the length of time needed to shape and compose these webs. They document the possibility of new spaces of co-habitation woven by spiders with different degrees of sociability. The installation challenges the idea of a hierarchical tree of life, and proposes hybridities between species and the worlds they inhabit.

In the adjacent gallery, three spider webs are presented in three-dimensions, encased in glass, spot lit. Each thread of spider silk is the path of a spider, imperceptibly guided by the fast moving molecules of the heated air. The floating threads of the “ballooning spiders" are a web in becoming, adrift on air until they meet a surface—bridging the spider/web's ability to write their passage, their drifting, and ways forward. Resembling the maps of past courses and future routes drawn by spiders and their webs, the glowing sculptures become the real-life maps of suspended cities inhabited by the spider/web, each appearing in its own unique galaxy, floating within an expansive, infinite landscape.

In a third gallery space, another multispecies spider web is presented in a darkened room with an active laser. As the laser scans the web, the visual vibratory signals of light reveal the hidden textures woven by the spider. As light intersects the air, new choreographies of silk and light appear and fade away, registering the ungraspable wholeness of the web through the virtual, temporary fractions emerging through a red light, as in a photographic darkroom. In a tridimensional web, some threads will always be hidden by their own intricacy. In the representations of the universe, through sophisticated radio telescope or computational simulations, dark matter remains elusive because it does not interact with light. A great deal of the universe is yet to become visible, acting as a concealed web that holds what we can perceive together. This begs the question: how many webs, cosmic, ecological, social, are we still not capable of seeing?

The exhibition will also present a continuation of the artist’s Cloud Cities body of work. Most notably, Cloud Cities was featured on the rooftop of the Metropolitan Museum of Art in New York in 2012, and still ranks as one of the most visited exhibitions at the institution. Conceived and inspired by the geometries of soap bubbles, the cluster-like artworks are composed of a number of interconnected modules, some with web-like structures set within them, which form geometric constellations inspired by the Weaire-Phelan structure. The Cloud Cities project is intimately tied to and embodied in the Aerocene Foundation, a community that proposes an epoch free from fossil fuel emissions, which challenges socio-political atmospheres by trespassing and weaving new, much needed, aerographies.

Cloud Cities are fictional urban and socioscapes in such imagined post-Anthropocenic future. These sculptural assemblages whose interplay between being tethered to the Earth whilst inviting our gaze to the sky, are devoted to reimagining life in tune and in collaboration with the atmosphere. Indeed, with 102,465 planes and about 8.3 million people traversing the atmosphere every day, swarms of particulate matter crossing borders and billions of pounds of carbon dioxide produced by fossil fuel aerial transportation, there is an entire metropolis up in the air already, coming with a huge cost and carbon print. The elemental imaginaries of Cloud Cities and Aerocene epoch call to open up the boundaries of the Earth toward a new interplanetary ecology of practice. We can reconnect with elemental sources of energy and form a new set of values that would overcome the extractive economies of the fossil fuel regime - a new stratigraphy of the future.

In conversation with and hanging alongside the Cloud Cities installation is a Zonal Harmonic. Situated within the artist’s interest in astronomical techniques and cosmological subjects, the work is composed of orbits held together purely by their mutual tension (tensegrity). The sculpture takes into account discrepancies in temporality that derive from variations of speed, tilt angles and orbits of celestial bodies. This work further illustrates Saraceno’s fascination with systems of interconnectedness and constantly shifting structures, at once seemingly fragile, yet also a tightly coiled center for potential.

Born in 1973 in Tucuman, Argentina, Saraceno currently lives and works in Berlin. He studied architecture at Universidad Nacional de Buenos Aires in Argentina from 1992 to 1999 and received postgraduate degrees in art and architecture from Escuela Superior de Bellas Artes de la Nación Ernesto de la Carcova, Buenos Aires (2000) and Staatliche Hochschule für Bildende Künste - Städelschule-Frankfurt am Main (2003). In 2009, he attended the International Space Studies Program at NASA Center Ames in Silicon Valley, CA, and was awarded the prestigious Calder Prize later that year. That same year Saraceno presented a major installation at the 53rd Venice Biennale as part of the group exhibition, Fari Mondi//Making Worlds, curated by Daniel Birnbaum. Among his many exhibitions since the late 1990s, Saraceno’s important solo presentations include ON AIR at Palais de Tokyo, Paris (2018), Tomás Saraceno: A Thermodynamic Imaginary, Museum of Art, Architecture and Technology, Lisboa, Portugal (2018), Entangled Orbits, Baltimore Museum of Art (2017), Aerosolar Journeys, Museum Haus Konstruktiv, Zürich, Switzerland (2017), Stillness in Motion — Cloud Cities, San Francisco Museum of Modern Art (2016), 163,000 Light Years, MARCO, Museum for Contemporary Art, Monterrey, Mexico (2016), Cosmic Jive, Tomás Saraceno: The Spider Sessions, at the Villa Croce in Genoa, Italy (2014), Tomás Saraceno at HfG Karlsruhe in Karlsruhe, Germany (2014), In orbit at Kunstsammlung Nordrhein-Westfalen K21 in Düsseldorf (2013), On Space time foam at Hangar Bicocca in Milan (2012-13), Tomás Saraceno on the Roof: Cloud City, a site-specific installation commissioned for The Metropolitan Museum of Art in New York (2012), Cloud Specific at the Kemper Museum of Contemporary Art in St. Louis (2011-12), Cloud Cities at Hamburger Bahnhof, Berlin (2011-12), 14 billion, which opened at Bonniers Konsthall in Stockholm in 2010 and traveled to the BALTIC Centre for Contemporary Art in Gateshead, UK through 2011, and Lighter than Air, a traveling exhibition at the Walker Arts Center in Minneapolis and Blaffer Art Museum at the University of Houston (2009-10).

His work is presently represented in the collections of the Museum of Modern Art in New York, Miami Art Museum, Musée d’Art Moderne Grand-Duc Jean in Luxembourg, Museum für Moderne Kunst in Frankfurt, San Francisco Museum of Modern Art, and the Walker Art Center in Minneapolis, among others. 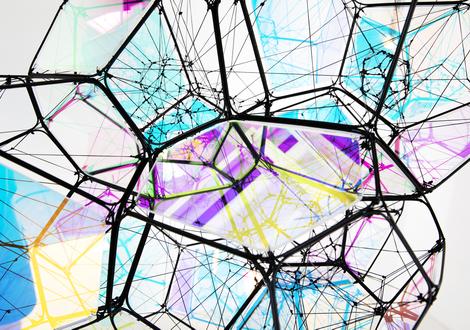